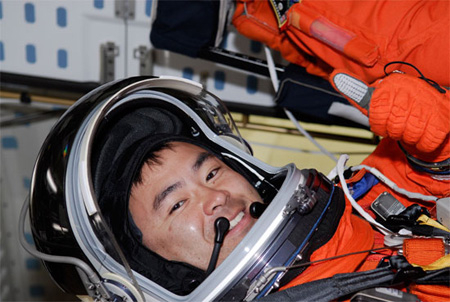 The STS-124 Mission crewmembers including astronaut Akihiko Hoshide wrapped up the STS-124 Terminal Countdown Demonstration Test (TCDT) held at NASA Kennedy Space Center from May 7 through May 9, 2008 (US Eastern Daylight Time: EDT).

STS-124 Mission crewmembers pausing for group photos at the launch pad 39A after wrapped up the TCDT (Image credit: NASA)

TCDT is a preflight rehearsal that is usually held two weeks before the launch. During the TCDT, mission crew and ground team review and drill the pre-launch activities to acquaint themselves with the countdown procedures.

During the TCDT, the STS-124 Mission crew carried out emergency drills at the launch pad and checked out the payloads, the Kibo Pressurized Module (PM) and JEM Remote Manipulator System (JEMRMS), installed in the shuttle's payload bay.

On May 9, 2008 (EDT), after completing the TCDT, STS-124 crewmembers returned to NASA Johnson Space Center (JSC). They will fly to KSC again later this month in preparation for their launch.

In preparation for the launch scheduled on May 31(EDT), Discovery's payload bay doors were closed on May 10, 2008 (EDT) with the Pressurized Module (PM) and the JEM Remote Manipulator System (JEMRMS) securely stowed inside.