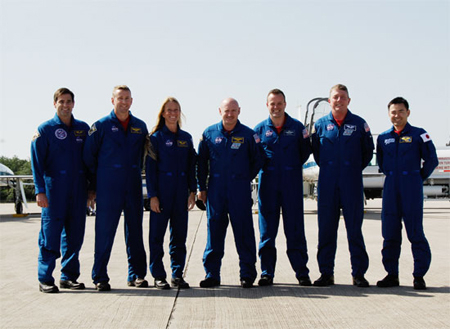 Discovery at the launch pad 39A (Image credit: NASA)

On May 3, 2008 (Japanese Standard Time: JST), the space shuttle Discovery rolled out from the Vehicle Assembly Building (VAB) to the launch pad 39A.

The STS-124 Mission's two major payloads, Kibo Pressurized Module (PM) and Remote Manipulator System (JEMRMS), which were transported to the launch pad prior to Discovery's rollout, were waiting for the arrival of Discovery at the launch pad.

The PM and JEMRMS were loaded into the shuttle's payload bay on May 5, 2008 (US Eastern Daylight Time: EDT).

PM and JEMRMS being loaded in the shuttle's payload bay (Image credit: NASA)

This prelaunch rehearsal called "Terminal Countdown Demonstration Test (TCDT)" is a dress rehearsal in which the mission crew and ground team review and drill the pre-launch activities to acquaint themselves with the countdown procedures. The STS-124 Mission crewmembers will don their orange launch and entry suits and will perform emergency escape drills at the launch pad.