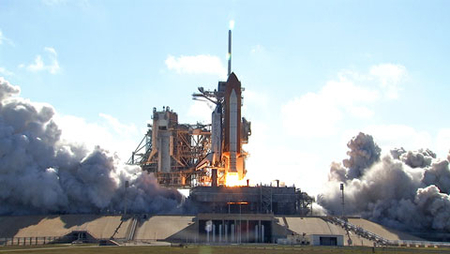 Several pieces of foam from the External Tank (ET) falling off was seen during the ascent; however, as these came off at relatively later in the ascent and would lack energy to do much damage, according to NASA. They will continue analyzing the imagery and video taken during launch and look into possible impact of the incident.

After launch, electric supply from the shuttle for the heater of Kibo Pressurized Module in the payload bay began, in order to avoid the temperature of equipments in it falls below acceptable range.

This is the 123rd space shuttle mission, and 35th mission for the Discovery.