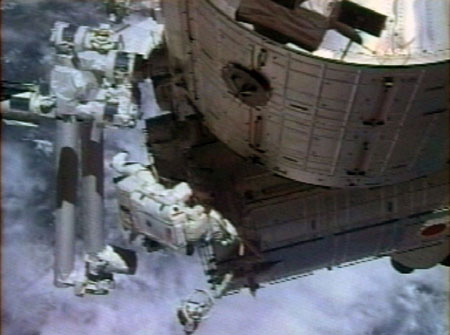 The mission's third and final Extravehicular Activity (EVA) was conducted today. The spacewalk went extremely well and all the scheduled tasks plus some get-ahead tasks were accomplished within the scheduled timeframe.
The EVA#3 began at 10:55 p.m. last night and lasted 6 hours and 33 minutes. In addition to replacing the Nitrogen Tank Assembly (NTA) on the S1 truss and outfitting the PM exterior, the EVA crew could collect samples from the port Solar Alpha Rotary Joint (SARJ), which some debris-like powdered materials were seen on the imagery taken during the EVA#2. The EVA crew also carried out several get-ahead tasks that were expected to be inserted if schedule permitted. The EVA#3 tasks completed today were as follows;


The MLI covers and launch locks on the JEMRMS cameras were removed today. Tomorrow (FD10), the JEMRMS will be fully deployed.

Hoshide manipulated the station's robotic arm, Space Station Remote Manipulator System (SSRMS), along with Nyburg to supported the EVA. While one of the EVA crew rode on the end of the SSRMS holding the NTA, Hoshide and Nyburg manipulated the SSRMS from inside the Destiny and transferred the EVA crew and the NTA between the External Stowage Platform 3 (ESP-3) and S1 truss.
After that, he returned to the outfitting of the PM/ELM-PS vestibule and continued the work. He also made progress on the transfer operation between the shuttle's middeck and ISS.