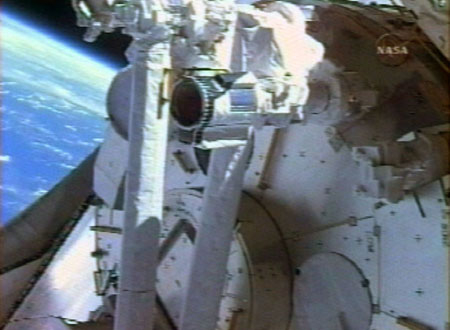 JEM Robotic Manipulator System (JEMRMS), the robotic arm of Kibo, was partly deployed for the first time ever starting at 1:38 am today, after its Hold and Release Mechanism (HRM) was released by commanding from within ISS, which had restrained the arm to the exterior of Kibo Pressurized Module (PM). The commanding to relase the HRM and the partial deployment of the JEMRMS were conducted from the RMS rack inside Kibo, operated by Hoshide. The arm will be deployed fully on Flight Day 10.

Meanwhile inside the Kibo module, astronaut Hoshide and Karen Nyberg worked on the wiring between Experiment Logistics Module Pressurized Section (ELM-PS) and PM necessary for the Heater Controller (HCTL), and the heater inside ELM-PS was activated.

Other activities onboard ISS included a NASA PAO event, in which all the crew participated and preparation of the third and last EVA planned tomorrow.

Close to the end of the crew day, a JAXA PAO event was held; a VIP call from Miraikan (National Museum of Emerging Science and Innovation), Tokyo. Japan. Astronaut Hoshide and shuttle commander Mark Kelly talked from inside newly outfitted Kibo PM via high definition video channel, with Ambassador J. Thomas Shieffer of United States, and several students from the primary / junior high schools which Hoshide used to attend, as well as Prime Minister Fukuda and Mr.Tokai, the Minister of Education, Culture, Sports, Science and Technology. JAXA's first generation astronaut and the president of Miraikan Mamoru Mouri acted as Executive Director.


Today Hoshide continued working on tasks related to Kibo, and participated in JAXA PAO event. As for the Kibo, he sent a command to release the HRM of JEMRMS, then operated JRMRMS for partial deployment. Then he worked with Nyberg on outfitting the vestibule between PM and ELM-PS, and activated the heater inside ELM-PS. He also participated in a NASA PAO event and a review for the procedure of EVA 3 tomorrow, along with his fellow crew.
Hoshide, during the VIP call from Prime Minister Fukuda, thanked for congratulations from the Ministers, shared his new experiences in space, and answered to the questions from the students from Futako Tamagawa primary school and Meikei Gakuen junior high school. He also encouraged applicants for next generation JAXA astronauts.