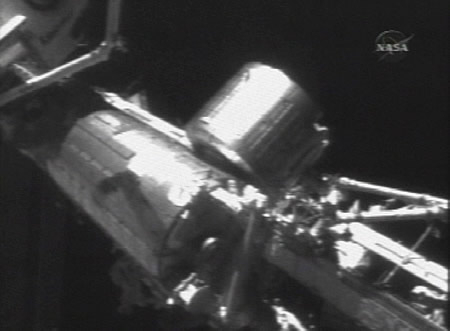 The ELM-PS was attached to the PM (Image credit: NASA)

The Kibo Experiment Logistics Module-Pressurized Section (ELM-PS) was successfully relocated today, from the temporary site on Harmony (node2) to its permanent home at the top of Kibo Pressurized module (PM).

The work started with disconnecting cables and tubes between ELM-PS and a port of Harmony (node 2), where ELM-PS had been attached waiting for PM to arrive. Then the vestibule between the two modules were depressurized in preparing relocation.

After the bolts of CBM (Common Berthing Mechanisms) were loosened to release the CBM, the Space Station Remote Manipulator System (SSRMS) grappled ELM-PS at 4: 15 am, and moved it to the top of Kibo PM. The relocation was completed at 6:17 am, as all the CBM bolts were securely tightened. Then pressurization and leak check of the vestibule was conducted.

During relocation, Karen Nyberg and Gregory E. Chamitoff operated the SSRMS and Hoshide and Chamitoff, the CBM.

Opening of the hatch and entrance to ELM-PS is scheduled on June 10 after outfitting of the vestibule is completed.

The JEMRMS was activated today, but will not be operated until FD8 when it will be partly deployed.

Hoshide's main activity today was related to preparation of relocating ELM-PS, including disconnecting lines and tubes and depressurizing of ELM-PS. He depressurized the vestibule and conducted leak check after ELM-PS was installed to PM.

He also operated CBM during ELM-PS detaching from Node2 and installing to PM.