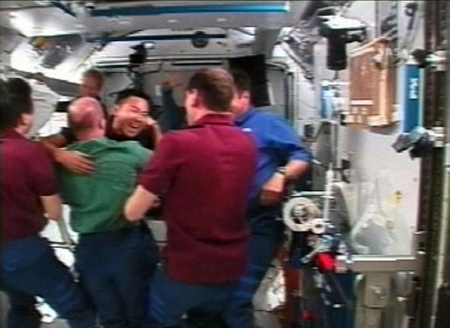 Space Shuttle Discovery docked with the ISS at 3:03 a.m. today.

The hatches between Discovery and the ISS were opened at 4:36 a.m. Following the hatch opening, the STS-124 crewmembers were welcomed by the ISS crew.

A Soyuz seat liner for NASA astronaut Gregory Chamitoff was moved from Discovery to the Soyuz spacecraft being docked to the ISS. Now, Chamitoff officially became the ISS Expedition 17 crew taking over Garret Reisman's former position as an ISS flight engineer.

Prior to the shuttle's docking to the ISS, Discovery performed the R-bar Pitch Maneuver (RPM) just below the ISS. During the RPM operation, the ISS crew took photos of Discovery's heat shield with 400 and 800 mm lens cameras. The photos taken during the RPM were downlinked to the ground for the engineer team to assess whether the shuttle's Thermal Protection System (TPS) is safe for reentry.

During the rendezvous/docking operations, Hoshide assisted with the docking maneuver obtaining the distance data between Discovery and the ISS by using the laser range systems. After docking, he did several tasks related to the Orbiter Docking Mechanism (ODS), which included the mechanism's leak check.

Thereafter he set up the ISS inboard TV camera, and initiated the transfer operations between the shuttle's middeck and ISS. At the end of the day, he reviewed the procedures of the tomorrow's spacewalk, which is the mission's first spacewalk, along with the other crewmembers.