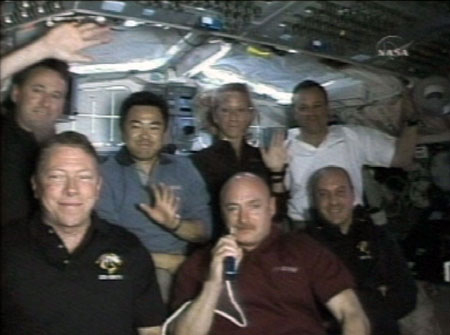 Today, seven astronauts aboard the space shuttle Discovery concentrated on the preparations for a landing on FD 15.

Although an object was seen floating away aft Discovery after RCS firing today, NASA determined, by thorough analysis of the video and imagery taken by the crew onboard, to be a small part that protects the Rudder Speed Break (RSB) at the vertical tail wing from ascent heat, and that there should be no concern for landing.

Meanwhile, the last PAO event for STS-124 before landing took place on FD14, in which all the crewmembers participated.

Astronaut Hoshide, along with his fellow crewmembers, focused on preparation for landing tomorrow. He stowed a number of items in the crew cabin, checked out the orange suit that he dons for landing. He also participated in the last PAO event before landing.