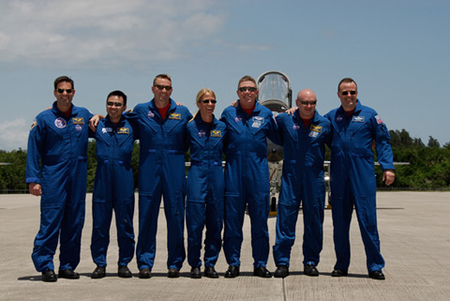 Astronaut Hoshide expressing his will and commitment to make the mission success (Image credit: NASA)

Each one of the crewmembers talked about their enthusiasm for the mission to the media corps gathered at the runway. Astronaut Hoshide said "It is great to be here, exciting mission is coming up. I just would like to thank for the hard work that all the Japanese people have been doing on the Japanese module. It's gonna be a great mission and very exciting especially for the Japanese folks."

The launch of Discovery is scheduled at 6:02 p.m. June 1. NASA's weather officer said that the weather forecast shows the 80% chance of favorable weather at the time of lift off.